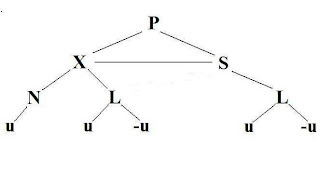 P is for paradigm. A paradigm is a grouping of associations you have on any subject. Associations are any thought, memory, feeling, or idea and a grouping of them creates a mental model or conceptualization. No matter how many associations from which you construct a subjects' paradigm there is only one paradigm per subject. With P at the top of the Philosophy Generator it is the culmination of our concern and everything underneath it must be a constituent of that paradigm. For illustrative purposes, we will consider your “Fire Paradigm.” I have chosen “fire” because it is a universal paradigm that everyone can relate to, have experiences with and comprehend. Any and all associations you might have about “fire” are included, whether you're aware of them or not. (“Fire” is a concrete example, but all ideas, even abstract ideas like “love” or “the colour red” are arranged in paradigm.) I'm sure you can think of a long list of “fire” associations. Typical examples might include: fire is hot, fire burns, fire hurts, fire is useful (for heat, light, warmth, cooking,) fire can kill, fire can cleanse my spirit, fire is portable, fire is symbolic, fire can destroy, fire can cauterize, fire can power my steam engine, fire can propel us into space, fire will appease the Gods...
X is for experiential norm. An experiential norm is an association you have constructed through your own experience. Obviously, every association one makes is a personal experience and my associations, on even the same subjects, will be different from yours. Such sentences must be considered in their entirety as not just statements, but complete and total ideas, as per the rules of Philosophy. So when it is said that, “An experiential norm is an association you have constructed through your own experience,” it is meant that it is only this and cannot be anything else. In other words, an experiential norm is an association that you have made without the influences of other peoples' associations. It is what you have come up with, when left to your own devices.

Looking at our list of associations for our “Fire Paradigm” we can now pick out the ones that are experiential norms: fire is hot, fire burns, fire hurts, fire can destroy, etc... It should be noted that any of these associations could have been taught to you, such as your mother may have taught you that the “oven” is “hot” and “mustn't be touched.” (Thus, three associations join to create the Paradigm, “Hot ovens mustn't be touched.”) If this was the case, then in fairness to our definitions, these examples would not qualify as experiential, until you had actually experienced the pain caused by touching a hot oven. Thus, these examples are common, and fair use, as sooner or later in this life, despite being taught, everyone burns themselves and sees something destroyed by fire.
In philosophical terms, experiential norms are knowledge by acquaintance. Knowledge by acquaintance is empirical, (verifiable by observation or experience, not reliant on theory or pure logic.) You know something to be factual because you've had personal experience with it. You are acquainted with a paradigm when it is determined by sense data, (information received by the five senses.) Such is it that a human may easily, through X, learn that fire burns.

S is for Social Norm. “Social norm” is a term borrowed from Sociology and in our context, it changes very little. A social norm is an association that you have constructed entirely from influence(s) or are the paradigm of an individual or group, other than you. These are the associations you have not made for yourself, they are not “your own devices.” In philosophical terms a social norm is knowledge by description. This means that you have learned of this association from sources outside your own experiences via their “description.” (Which could be a lesson, demonstration, story, the point is you are not directly sensing the associative data yourself, it is “second hand.”) It is possible for a social norm to become an experiential norm via “acquaintance” or having been personally experienced. This is why the Philosophy Generator has a line under P connecting S to X. It is a completely reasonable thing to say both that that an experience can be taught and a lesson can be experienced. (Such as your Mother taught you the oven is hot, but odds are, you're going to burn yourself at some point.) Later we will examine what it means when a social norm cannot be experienced. These types of associations, the kind that can't be directly experienced, we will refer to as “strict.” Looking at our list of “fire associations,” we can now pick out those that strictly fall into the category of social norms: “Fire will appease the Gods.” “Fire can cleanse my spirit.”
There is no rule that states that any particular Paradigm has to be either X or S. It must be at least one, but it can be built from associations that come from both experiential and social norms. Such is the case with certain aspects of our “fire” paradigm. Let's examine the practice of cauterization with a hot iron. At some point in history an ancestor of ours, already having carried fire into the iron age, learning from elders who have passed down “the knowledge” of fire's utility, somehow discovered that holding a red hot iron to flesh would “melt it together,” closing a wound. For that person, this realization was an experiential norm developed from previous social norms and one experience. (Some individual would have to have “done it first,” possibly thousands of years previous, with a burning ember, held in moss. This matters not for we are discussing the paradigm of cauterization with a hot iron.) Thus, the paradigm has associations of lesson: Fire, heat, iron work, and finally, perhaps by accident, the experience of cauterization was discovered. For everyone that he taught this to and then for everyone they taught this to, cauterization would be a social norm. For you, it would stay “S” until you “X'd” it. (Again, you don't have to be the one being cauterized to have this experience, you could just as readily see it happen.) If the associations of a particular paradigm come from both sides of the Philosophy Generator they are said to have a “mixed constituency.”

So far, we have examined what constitutes a particular paradigm, “fire,” and where those constituents originated, either X and/or S. Now we must look at how we first experienced these associations. Did we learn them? Were they the product of instinct and common sense or expectation due to existence?
L is for Learned. These are the associations that had to have been created anew. There are three types of learned associations and each of this has a place in the Philosophy Generator.

To learn more about the philosophy generator and what can be done with it, read Brian's book: Anti-Social Engineering the Hyper-Manipulated Self