This has been a productive year for me.
Anti-Social Engineering the Hyper-Manipulated Self is out, finally...
The traffic to this site has more than doubled. I'm currently averaging forty visits a day.
Most of these visits stay between 7 and 12 mintues.
Many of these visitors return at a later date to read more.
The days I release new material, the visits quadruple.
My multi-language experiment has opened my work up to new audiences, albeit poorly translated. Obviously, given my subject matter, a global audience is preferred.

I couldn't have done this without you, the audience, the reader, the thinker and so I thank you.

According to the stats, my most popular essays are:
1. Capitalism isn't evil, it's stupid
2. The Philosophy Generator
3. A comment on Canadian nationalism
4. The War on Reason (in English, although most popular as Причина войны)

I also publish material at science20.com, which gets a great deal more traffic than I do. Check out the most popular essay I have there...
Shame Theory

Thanks again for reading, love to have more comments...
Looking forward to 2011, the year of accountability.

As always,
Best Thoughts,
Brian Taylor
at 7:45 PM No comments:


Anti-Social Engineering the Hyper-Manipulated Self 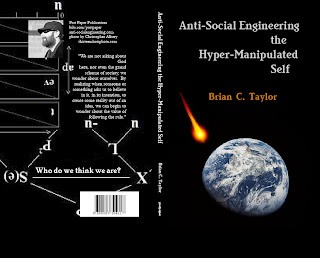 The book contains charts, photos, a bibliography and index.


Synopsis:
Some of the problems we face in modernity are of our own design, but we are manipulated to desire the design. In philosophical terms, it is the semantic deception of dialectical theses. Explaining what this means, how it works and what can be done to combat it is the goal of this book.    We used to rely on our wits. Now our problems are solved for us. This is a pleasant state of affairs, but it does not speak to our essence, nor even allow us to practise it. In a way, the system is living our lives for us. What if the system is wrong?
In this short work Brian C. Taylor, writer, philosopher and social critic follows our ideas about the self through the ages, into modernity, into consumerism, the war on terror and other timely concerns that aim to socially engineer our ideas. His goal is to scientifically return your authenticity.
Chasing philosophers through the ages, following our own ideas about the self, to dismantle both himself and modernity, the author brings in this tiny work, with candour, wisdom and depth, a dismantling of thought, a critique of the species, a pathway to virtue.

Quotations from the book:
"We are not talking about God here, nor even the grand scheme of society, we wonder about ourselves. By realizing when someone or something asks us to believe in it, in its intention, to create some reality out of an idea, we can begin to wonder about the value of following the rule."

"No matter how you reduce it, the events that took place on Manhattan Island, September 11, 2001 were a direct result of the intentions of the American government."

“Here, in our modern times, we don’t have to look to conspiracies or politics, just turn on your TV and watch some commercials. Is it not a paranoid delusion that sells anything to rid you of it? Is it not a hallucination that plays a jingle in your head when you see the golden arches of McDonalds? Do you not feel depressed when you can’t get what you want? Blame your thoughts on your environment for the problem, not the environment. You are the problem, change your thinking.”

Paperback is available at the following stores:

The Digital Download is available at the following sites:

Intentional Claus
The Santa Intention
at 8:42 PM No comments:

Globalization and the New World Order